Did you know that the world’s most-consumed drink is tea? Surprisingly, coffee isn’t the most consumed drink despite being one of the most popular options in the western world.

So where did tea originate from?

To ask this question, we have to look at the history of tea and how it became one of the most prominent drinks in the modern world.

Well, the story of tea starts from ancient China. According to a legend in around 2750 BC, a Chinese emperor named Shen Nung was sitting beneath a tree while boiling water. A few leaves from the tree fell and entered the boiling pot of water. After drinking the “boiled leaf water”, he decided to recreate the drink, and soon fell in love with it. The tree was a Camellia sinensis, and thus, tea was created. No one knows for sure if this story is true or not, but it is the best information on how tea came to be. However, it took over 3000 years before tea became a popular drink in China. In ancient China, it was used primarily as medicine along with other medicinal herbs.

Tea Travels Around the World

Tea was not known to the rest of the world until the 9th century when a Japanese monk found out about tea when they traveled to China. Many of the tea ceremonies in Japan were developed from that point on.

After that, it would take another 8 centuries before Dutch traders brought tea to Europe in large quantities. During this time, not many people drank tea, because of how foreign it was in Europe until Portuguese noblewoman Queen Catherine of Braganza popularized tea in England after marrying King Charles II. A very well-known stereotype of British people is their love for tea, and this is the point where their love for tea started.

By the eighteenth century (1700’s), the tea trade was already booming in Europe. Tea was 10 times the price of coffee at the time and was very lucrative. In fact, many Western trading companies owe their fortunes to tea, such as the East India Company.

The British usually paid for tea using silver and other precious metals. When that proved to be too expensive, they switched to paying with opium, an addicting plant/drug that when used, can be very dangerous. At first, the Chinese enjoyed trading with the British, but soon after the British switched to paying with opium, the nation was under crisis. There was a big public health problem, as many Chinese people were getting addicted to opium. This caused the ruler of China at the time to order his army to destroy British trading ships.

However, this would only anger the British. 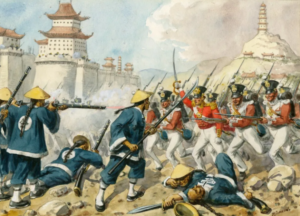 The destruction of British trading ships would start the First Opium war. Many battles were fought between the British and the Chinese until in 1842, the Chinese ceded Hong Kong to the British, and continued with the unfavorable trading conditions.

So now that we have learned more about the history of tea, where did the word “tea” originate, and also the chinese equivalent “茶” (cha)?

The origins of the word “tea” came all the way from the Hokkien dialect in southern Fujian. The ports of Xiamen and Quanzhou were major trading ports for the Europeans, especially the dutch. This word went on to spread into the Western world, which is why most European countries call it a variation of “tea”. 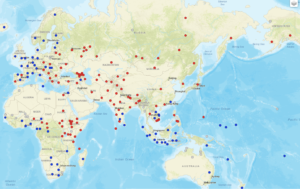 The Rise, Fall, and Rebirth of Popeyes

How are Candy Canes Made?