The presence of nuclear energy is felt in every developed country, and has long been heralded as a spearhead on the development of clean energy. Incomprehensible power and efficiency with almost no waste in comparison to conventional non-renewables almost seems too good to be true – and for many advocates for the opposition of nuclear power, it indeed is. 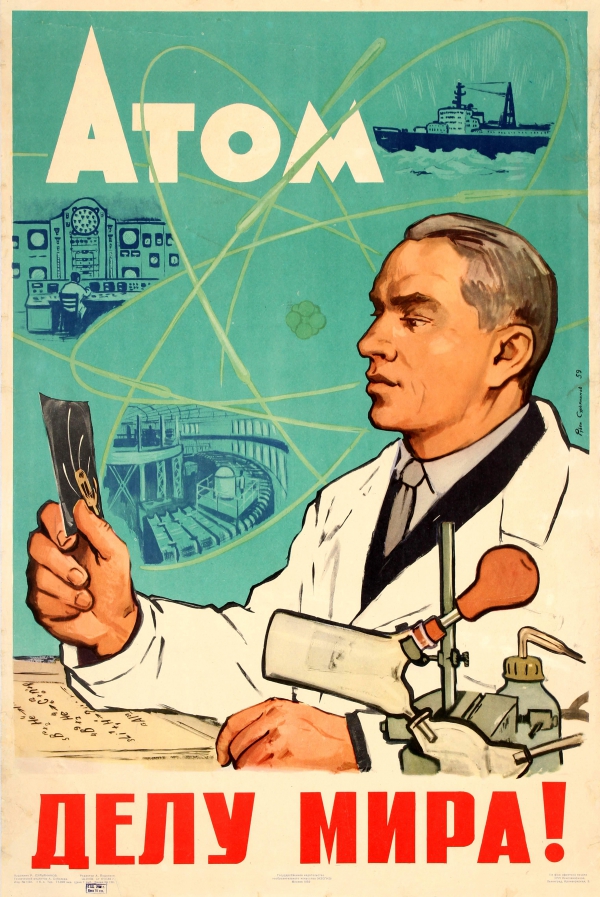 A Russian propaganda poster promoting nuclear development and its uses in the midst of the Cold War, 1959

Just as prevalent as the incredible potential of nuclear energy, there exists tragic scars that mar the timeline of nuclear history. Names such as Chernobyl, Fukushima, Three-Mile-Island, are all infamous nuclear disasters that strike an ominous atmosphere of total annihilation. However terrible and preventable these accidents were, there is still another horrifying lineage in nuclear technology that is uncomfortably intimate with the development of nuclear energy: the nuclear weapon. 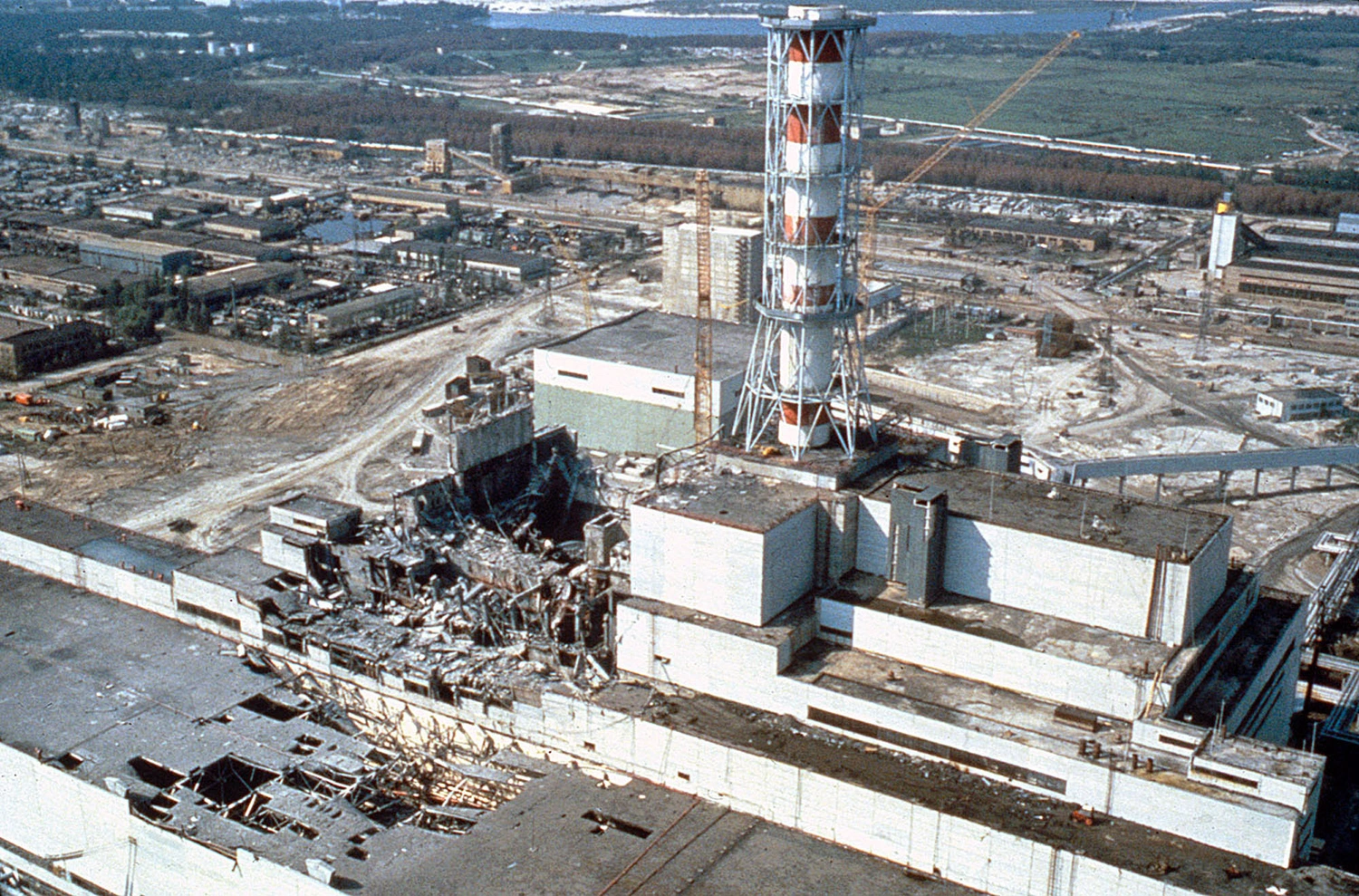 There are clear proponents to both sides of a nuclear future, each sporting a wide array of reasoning and justifications. To properly understand the situation and analyze the reasoning from a wide variety of sources, we must first understand the current global standings, both political and technical, in regards to nuclear power.

-The Current State of Nuclear Energy

It has been almost a century since controlled nuclear fission was first achieved in laboratories by Otto Hahn and Fritz Strassmann in 1938. Although fission was achieved, harnessing such energy proved to be extraordinarily difficult and seemed to require an enormous boost in development and technology. This ‘boost’ did eventually manifest, but in the form of governmental development on the nuclear bomb. Throughout WW2 and the following years, huge amounts of resources were used to develop violent nuclear fission, and one such program, the Manhattan Project, succeeded on July 16th, 1945. The bomb shocked the world, and the devastating potential of nuclear power had skyrocketed to top priority in STEM sectors around the globe. On the other hand, a far more useful and peaceful result of nuclear studies was also created: the first sustained nuclear reactor, designed by Enrico Fermi in 1942.

Most of the nuclear reactors that are used around the world for municipal energy today fall into one of two categories: Boiling Water Reactors and Pressurized Water Reactors (BWR and PWR respectively), both of which use water to harness the energy released by nuclear fission. In comparison to conventional means of energy production, the efficiency and power output of these nuclear reactors is extremely attractive: more energy is produced from a single ~10 gram uranium pellet than from 1 whole ton of coal. In addition, nuclear energy doesn’t come at a monstrous cost to the environment like other nonrenewable resources – in some cases like greenhouse emissions, it basically does not contribute at all- and there is no economic incentive to significantly damage the environment to acquire the materials necessary for power generation. 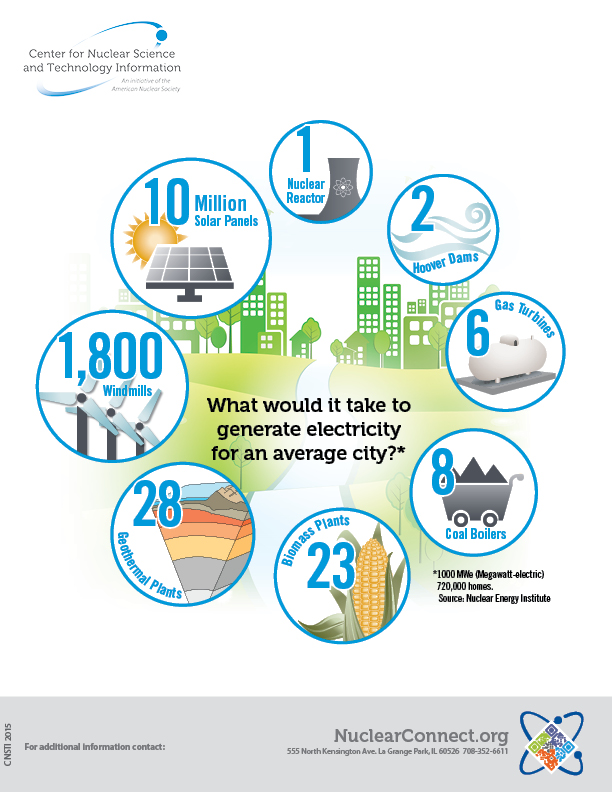 Currently in the US, there are 56 commercially operating nuclear power plants, with a combined total of 94 nuclear reactors. Of these reactors, almost all are 2nd generation PWR or BWR, with updated security and safety measures. Besides energy production for cities and communities, nuclear reactors are also extensively used to power massive machinery with specific needs – all submarines and aircraft carriers currently serving in the US are equipped with a nuclear reactor, as it is the most reliable and efficient source of energy on the high seas.

Thus far, nuclear power seems to be a far better alternative for power generation, especially in developed countries that have the technological and logistical capabilities to equip such reactors. Then why does nuclear power still only account for a measly 10% of energy generation worldwide?

Nuclear fission may seem to solve so many of the problems regarding ‘clean energy production’, but it cannot discard a shameful designation that lumps it together with fossil fuels and hydrocarbons: it is a nonrenewable resource, and still produces waste products through fission.

This is one of the largest concerns that proponents against nuclear power raise – and rightfully so. In modern times, where so much emphasis is placed upon the reduction of waste and the potential of future pollution, the management of spent nuclear fuel and other waste products comes under intense scrutiny. In this aspect, nuclear power produces the worst waste products out of any industrial process – spent nuclear waste has such an amalgamation of terrible qualities, it’s almost as if it was to balance out the terrific energy efficiency.

Below lists the 2 most notable qualities of nuclear waste:

1. It is extremely dangerous, and costly, to handle. Radiation from spent nuclear fuel can easily damage equipment, personnel, and the environment if not handled properly.

2. There is no way to “properly store” or neutralize nuclear waste, due to the unique deterioration pattern of radiation – over a huge amount of times, radiation slowly decreases by margins of ½. Unfortunately, there is partially no better way to dispose of this waste other than to seal it into the ground and wait for it to become inert. 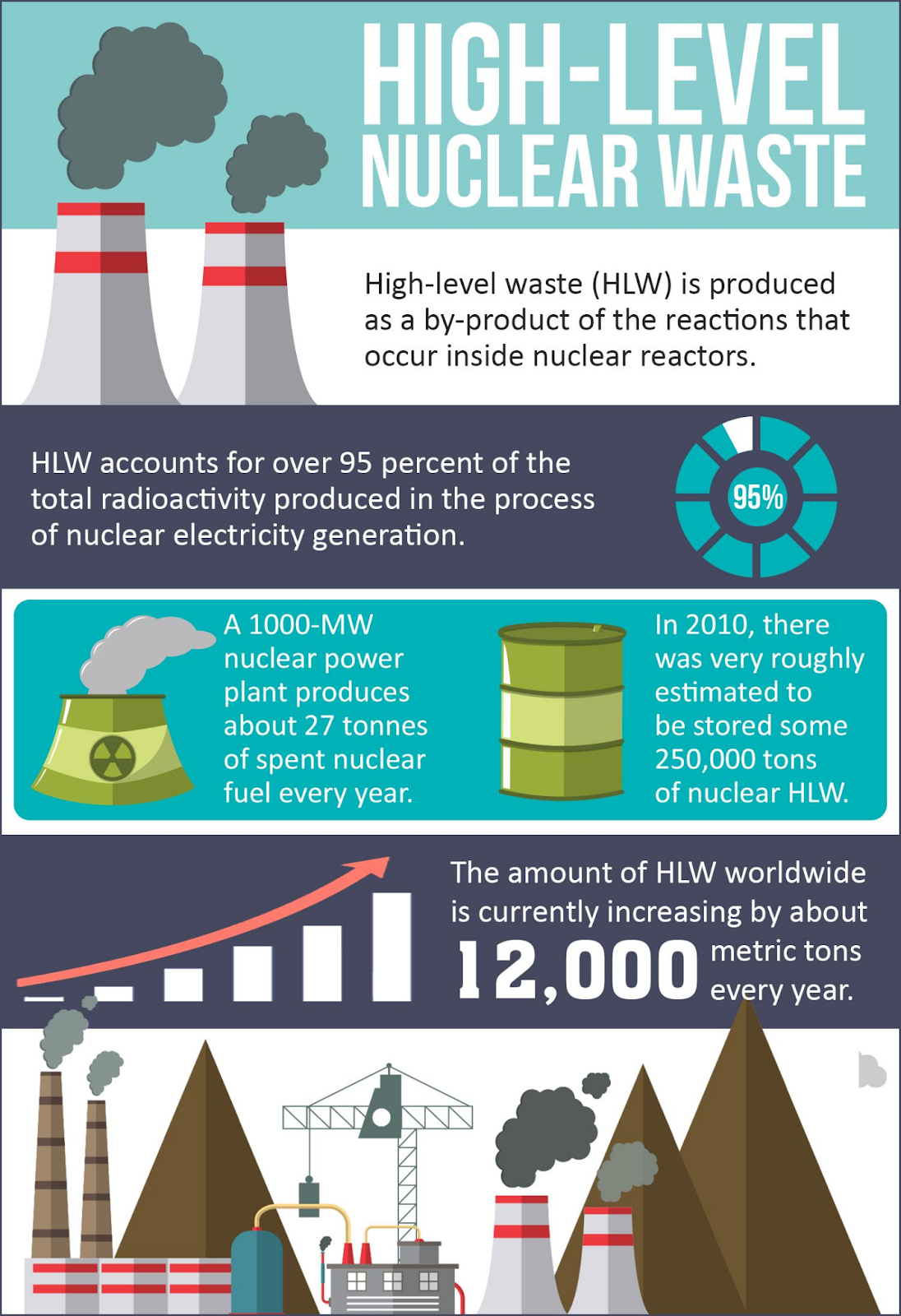 Nuclear radiation is a form of energy that is intertwined in the production of nuclear energy from the splitting of atoms to the properties of waste. The dangers of radiation are related to anything even remotely nuclear, as they often go hand in hand; proponents often use the fear of radiation as part of their reasoning against nuclear energy. They have every right to do so, because radiation is just as bad as it seems. It’s completely by human means, and can only be monitored via a Geiger counter. Thus, it seems perfectly reasonable for individuals to advocate for legislation that deals with proper radiation containment concerning energy production, a proper “buffer zone” that separates nuclear facilities from nearby communities, etc. However, do the risks of radiation alone pose strong enough reasoning to completely dismantle and remove nuclear power?

In most cases, no. Many oppose nuclear power because of logistics – a region and corresponding nation  must meet specific requirements to install nuclear energy; nuclear energy may be efficient to produce and pay for itself in the long run, but the initial development and construction stages (along with difficult maintenance) are extremely expensive. Due to these costs, the overall energy profit generated in the early to mid stages of a reactor’s lifetime isn’t very impressive, especially compared to other completely renewable energy sources such as wind and hydropower. One of the largest elements in the argument against nuclear power arises from security concerns – nuclear power exists in a developmental parallel to nuclear weaponry, providing incentive for nations to suppress and deny nuclear research in specific territories. In addition, nuclear power plants are popular targets for terrorist attacks, both physical and virtual. While many proponents argue that modern power plants have advanced defense measures preventing catastrophic failures that cause a whole plethora of risks, it is important to remember that there is no margin for error – it only takes 1 failure to result in a potential death toll in the thousands.

Although it seems morally questionable to ever weigh human lives against economic potential, the fact remains that nuclear energy remains a popular choice in developed 1st and 2nd world countries, especially since the push for the reduction of dependency on traditional non-renewables far outweighs the risks that come with nuclear fission.

So what are the solutions to these problems? Will we ever be able to physically achieve them? Some technologies, like nuclear fusion, have great amounts of funding and research, but are difficult to commercialize, and even to this day, containment of nuclear waste is extremely controversial. One stance is for certain, however – nuclear power as a power source will be prevalent in our future. Nuclear energy holds a large economic incentive (especially in the US), and thus will remain part of the energy grid in the future.

It’s somewhat obvious that nuclear power will remain relatively stable in the US, but what about the rest of the world? In stark contrast, especially in Middle Eastern countries, it seems that nuclear development and research is doomed to forever remain in a purgatory of forced intellectual suppression – the seemingly eternal hostility between Israel and Iran has led to the assasination of 7 Iranian nuclear scientists.

Modern opposition still has effects in developed countries as well, notably in Europe- where a popular regional opinion has resulted in an overall opposition to nuclear power. Germany has commissioned the retirement of 8 of its 17 reactors by 2022, many countries including Switzerland and Spain have removed and vetoed all plans for future nuclear power plants, and countless other European nations have pledged to fully remain non-nuclear. This opposition arises from the populace, which in turn pressure their respective elected officials, who then in turn create official changes within a country’s power grid. It is important to note that for both ends of the developmental spectrum, nuclear power many not be the optimal choice – in these European nations, resources and existing energy potential regarding fully renewable energy sources (such as hydropower in Germany and geothermal in Nordic countries) provide far better solutions to each region’s electricity needs. 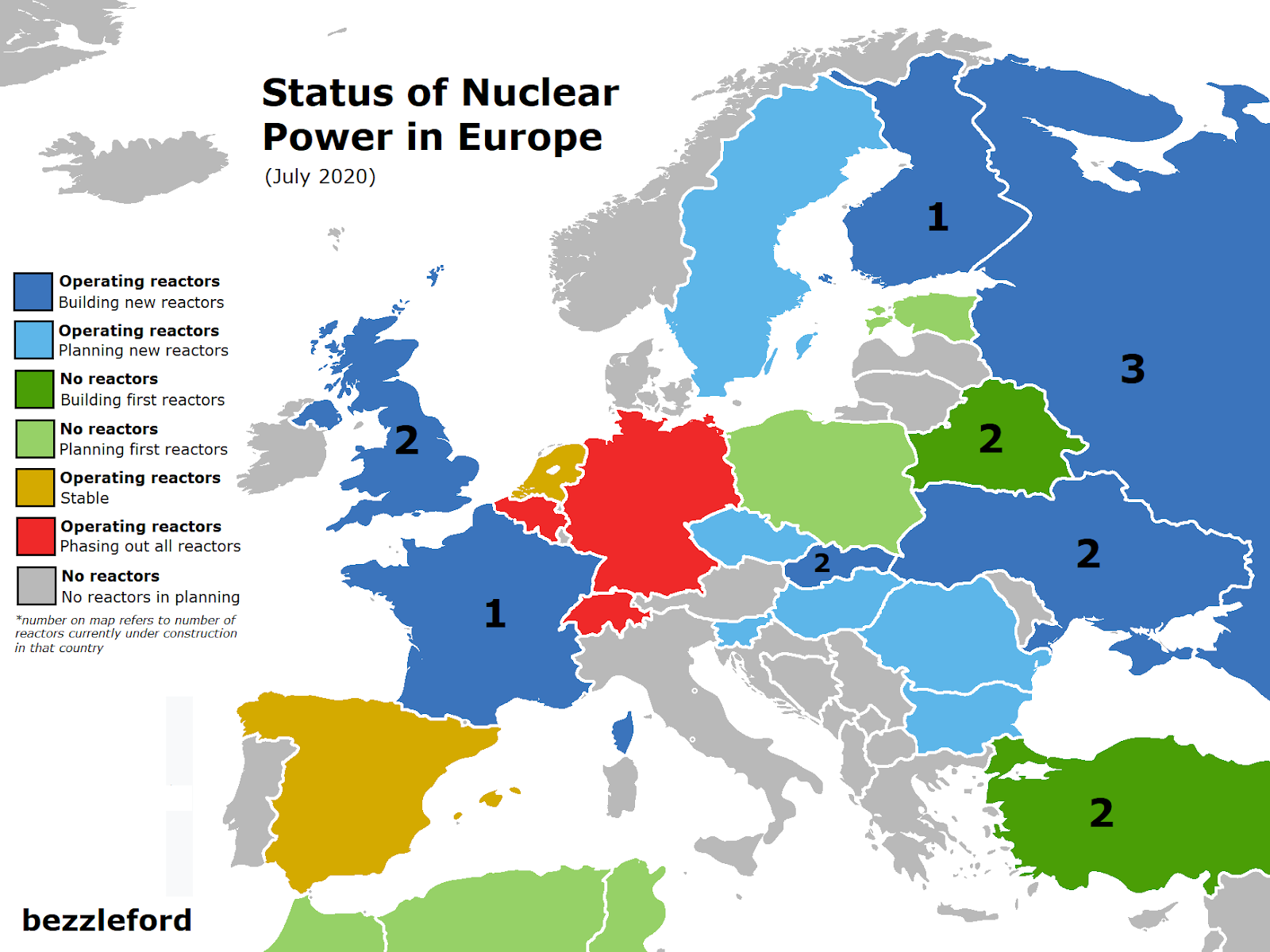 Nuclear energy certainly hasn’t hit its technological zenith, either. Some incredibly promising reactor designs such as the fast-spectrum reactor promise greater stability and profit with existing infrastructure, while maximum potential reactors such as the thorium reactor or even the nuclear fusion reactor reach a level of productivity and cleanliness that they can be classified as renewable energy for all intents and purposes.

It is clear that our current nuclear technology is a stepping stone to cleaner, safer energy around the globe. We have been given an opportunity to not only harness this new type of incredibly potent energy, but also to learn and understand an entirely new field of science. One acquires a hammer to build a shed, but you can never build a shed out of hammers.

The Importance of Sleep

Effects of the Consumer Shift Onto Online Media Over the Pandemic

Incredibly informative and overall amazing article. So far, very few on this website have been able to achieve the level of professionalism as the ones tackling the real issues we may face in the future. Very good work, and I look forward to seeing more articles as well written as this one.